Weißwasser in Upper Lusatia is a medium-sized town in Eastern Saxony/Germany. From autumn 2018 to November 2019, "Modellfall Weißwasser oder Das Maß aller Dinge" took place here, a performative city project on the occasion of the centenary of the Bauhaus founded in Weimar in 1919. 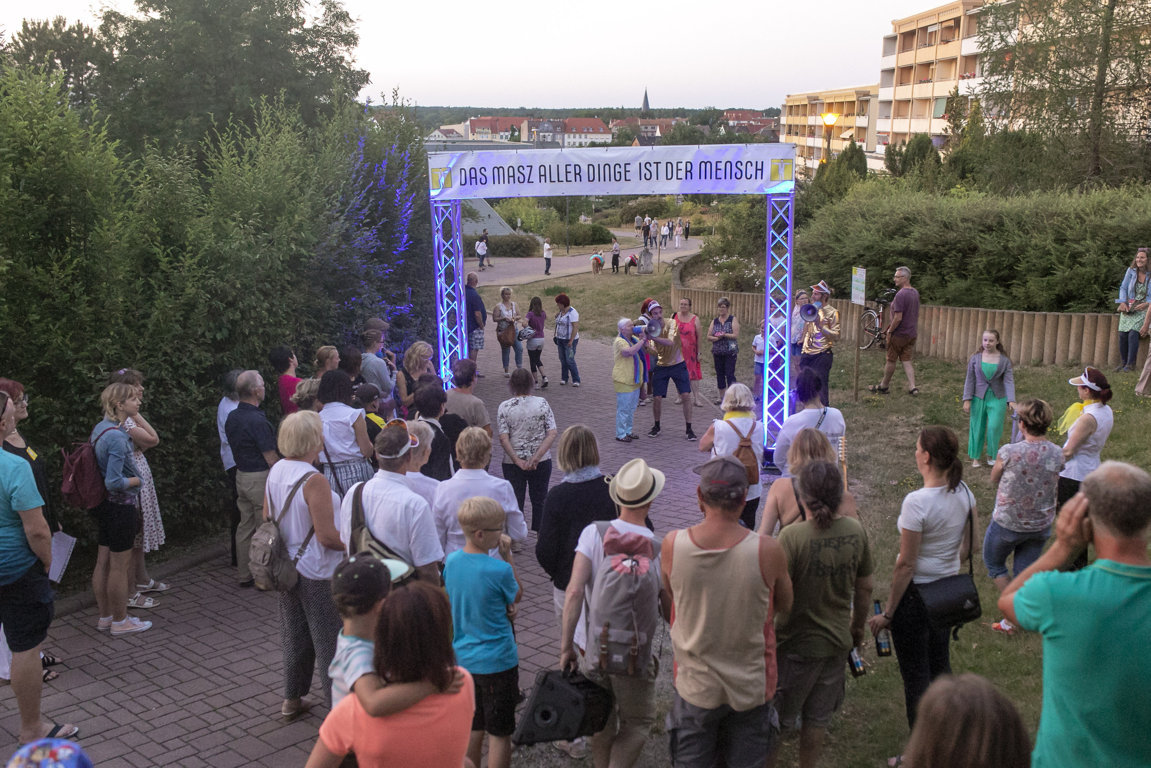 From the end of the 19th century to the beginning of the 1990s, Weißwasser was one of the most important locations for the production of utility glass in Europe. At the same time, the site can be regarded as a model case for the implementation of Bauhaus ideas in large-scale industry: in 1935, two Bauhaus students of the first hour, the glass designer Wilhelm Wagenfeld and the architect Ernst Neufert, come to Weißwasser. They have a lasting influence on local industry, and their activities even influences the GDR era. In addition to lignite power generation with the Nochten open-cast mine and the Boxberg power station directly on the gates of the city, glass production was the most important employer for Weißwasser until the mid-1990s. In the meantime, however, it has largely disappeared from Upper Lusatia - and with it thousands of jobs.
These developments are also reflected in the population of the city. By 1990, Weißwasser had grown to around 38,000 inhabitants inside the country, but as a result of deindustrialisation it now has only around 16,000 inhabitants inside the country. Nowhere else in Germany is there a comparable dynamic of growth and shrinkage. Accordingly, there is a lot of vacancy and extensive industrial wasteland in the city. A further upheaval is also just around the corner with the end of lignite-fired power generation.
Weißwasser can be regarded as a "model case" insofar as many problems (and approaches to solutions) can be observed here, which occur in a similar way in numerous municipalities in Germany and internationally: Emigration of industry, social upheavals after the collapse of socialism, shrinking population figures, peripheral geographical location away from major transport axes, strengthening of right-wing national currents. In addition to these challenges, there are also positive developments on the ground. The rapid population decline of the last 30 years seems to have stopped until further notice. A number of forward-looking local initiatives are trying to develop new perspectives. Structural change needs to be shaped, the city needs to reinvent itself once again.

Approaches of the project

The performative urban project "Modellfall Weißwasser" placed the keyword "transformation" at the centre of its investigations. In a three-month research phase, the past, present and future upheavals were examined on site. The project was also inspired by ideas from the Bauhaus. Wilhelm Wagenfeld and Ernst Neufert took a focal point. Thus the project was structured into five artistic workshops - inspired by the workshop principle of the Bauhaus School and the Wagenfeld Workshop, which the designer founded in Weißwasser in the 1930s. Also important to the project were the socially oriented design ideals, the idea of "using" the objects, which found their way into the project in a reflection on current and future "city use".
Accordingly, five workshops were founded under the direction of Constanze Fischbeck (film), Bernadette La Hengst (choir), Stefan Nolte (theatre), Jochen Roller (dance/choreography) and Hendrik Scheel (installation/objects). Extensive research on site and cooperation with numerous local actors, associations and individuals shaped the project. In the course of 10 months, intensive work was carried out with pupils, a theatre group was founded, a "choir of transformation" was created, a punk band was accompanied in the development of their songs, associations and initiatives were brought into conversation with each other and with the city administration. Above all, however, numerous discussions and interviews were conducted. A series of four individual events between October 2018 and May 2019 finally led to the great climax: on two weekends in June 2019, the city became the stage for a performative parcours. With the means of art, places were symbolically and concretely transformed and reconquered for the public. The Weißwasseraner*innen themselves, who became active for the "Modellfall", were essential here. They have left familiar territory to redesign the city together. In a playful way, the upheavals of the past were examined, futures were designed, and new power of action was gained. For four days, a cooperation in new forms was tested at a total of seven neuralgic locations in the city. In addition to around 100 participants from Weißwasser, the audience also met the Bauhaus pupils Wagenfeld and Neufert, who - played by the actors Heiner Bomhard and Sebastian Straub - returned to their former place of work during the entire project and played an important role in the course.
This website wants to document the course and the work on site. And at the same time make work experiences and intermediate states accessible and deepen some of the pending discourses in a series of interviews and text contributions.